Artist friend Dan Rizzie is welcomed by Actor Bill Murray at the Spanierman Modern Gallery in midtown New York City at his smash hit opening reception. Mary and I enjoyed the evening’s ambience of this incredible gallery at a prime location off of Fifth Avenue. We have had the pleasure of meeting the gallery’s owner, Ira Spanierman and his wife. Also there was artist friend, Jeff Muhs and his wife of Southampton.  Great connections showed up among many: Peter Marcelle of Hampton Road Gallery in Southampton, who also showed Rizzie’s art, and artist Judy Rey Wasserman.

I had met and known Dan Rizzie from one of his informal lectures on his work in Long Island’s East End. His work is for me a most melodically colorful and geometric treat. 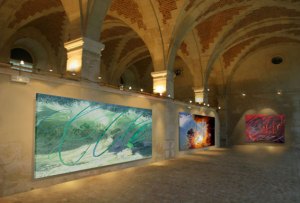 Welcome! This site is intended to place the iphone TM technology into immediate use for posting live events revolving around Wildbank’s art activities and travels. Comments and messages are welcome for consideration and posting. If you wish to recommend an art event, please contact us in an email form at http://wildbank.com